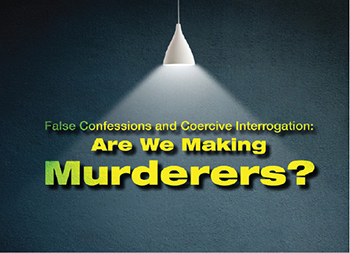 It’s no secret that criminal suspects in Illinois and elsewhere confess to crimes they didn’t commit, often after aggressive police interrogation. But how widespread is involuntary confession in the post-Jon Burge era, and what’s being done to address it?

The Netflix docu-series Making a Murderer, which tells the story of two men convicted of a 2005 rape and murder to which they later said one of them was coerced into confessing, has brought not only this case but the issues surrounding it into a prime-time spotlight.

Steven Avery and his mentally challenged nephew, Brendan Dassey, were convicted of the rape and murder of Teresa Halbach after Dassey, then 16, confessed. The Northwestern University Center on Wrongful Convictions of Youth took up the case and has followed it through a Wisconsin appellate court denial of appeal and the state’s supreme court’s refusal to hear it.

The case is now pending in federal court, with this most recent appeal based on constitutional issues that include whether the interrogation tactics used against Dassey resulted in what amounted to an involuntary confession. (Downers Grove lawyer Kathleen Zellner now represents Avery.) And that issue of involuntary confessions – obtained not through Jon Burge-like physical torture but what some view as coercive psychological techniques – is the subject of ongoing debate, along with some areas of agreement, among defense attorneys and prosecutors. Read More »