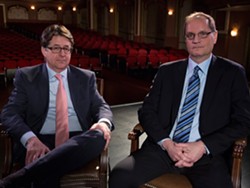 Making A Murderer should terrify you.

The story of Steven Avery — sent to prison for 18 years for a rape he didn’t commit, following an investigation so shoddy you’d be forgiven for thinking sheriff’s deputies in Manitowoc County, Wis. railroaded him; then exonerated and released thanks to DNA evidence, before he was again arrested, convicted, and sent to prison two years later, this time for life, following an even more questionable murder investigation — is illuminating and outrageous, and helps explain why the 10-part documentary about his trials became a sensation.

But scarier still than a criminal justice system with investigators who, without lawyers present, can coerce a mentally infirm 15-year-old boy into a false confession — as sheriff’s investigators from the same Manitowoc County did with Avery’s cousin, Brendan Dassey — is how many more Steve Averys are in the world, and how close the story came to not being told at all. Read more >>